I think that the beauty of this could be that by writing those API end points, you cover awhole lot of ground. With it you have support for emailing notes, like some people want, because in IFTTT one could make a recipe along the lines of “IF gmail tagges #dl THEN add note to…”. Got people who want to build a system of Evernote + Dynalist? Not a problem. Add notes from a specific document to OneDrive? Not a problem.

No worries about premium either. You can make API calls a premium only feature. For example, it’s impossible on a free Feedly account to IFTTT your items to a scheduling service. 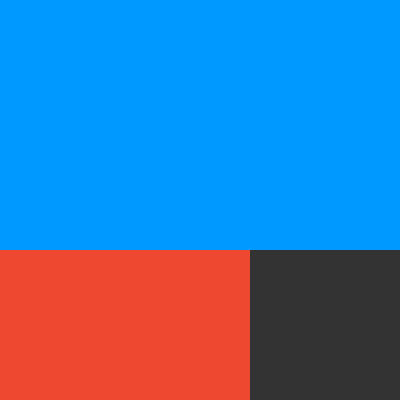 Developers and companies can work with IFTTT to build custom integrations and features directly into their apps, devices, and services.

I love their idea, but if we need to make several integration for these things, it’s kinda defeating their own purposes.

it might help dynalist get some more exposure as well, considering there are only 3 or 4 other note taking apps there at the moment

No that’s the beauty: you only provide the endpoints like “create note” – IFTTT is the glue that puts it together. So you don’t write an integration with Evernote: the IFTTT user sets up a recipe.

Check the https://ifttt.com/evernote page and scroll all the way to the bottom, click past the “more” button until you see “actions and triggers”: 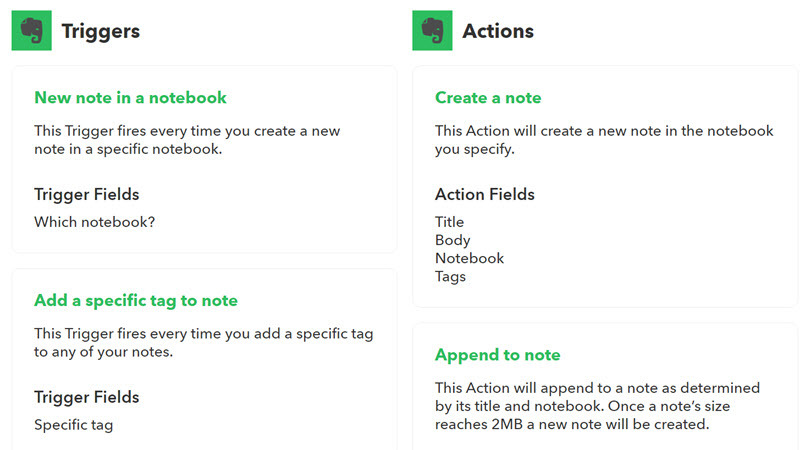 Those actions & triggers, that is what Evernote has coded. With that, any user can integrate Dropbox with Evernote, to name but one example.

As you see, those actions and triggers are things Evernote already “does”: “new note” is something their app has already programmed in. They “just” had to expose that to IFTTT in an standard API kind of way.

IFTTT is the current standard, I would say. It’s the more popular of the 2 as it is free. It’s also partner-driven: the services there want to work with IFTTT. Zapier is a paid service and makes services work together no matter what.

Yup – and not just that, what I like from it is that a lot of features or integrations asked for on the forum, are covered this way without additional development.

I love their idea, but if we need to make several integrations for these things, it’s kinda defeating their own purposes.

Isn’t Zapier a paid service? I think IFTTT wins in that case.

I think all you need to you worry about on your end is releasing an API in which the user can authenticate their account and use methods like:

I’m sure there’s more potential than that but with these basics I think we, the community, can accomplish a lot.

Then when it comes to services like IFTTT, they will piece of cake.

Zapier is more advanced (and user friendly) and more towards business systems/community. IFTTT is geared more towards private consumers and also, the integrations slant more towards home automation, internet of things and so on.
Both of them cover all the typical systems though. But Zapier has more triggers and actions.

Also, a VERY IMPORTANT advantage of Zapier and an example of “more advanced” is that it is able to forward source URLS for systems like GMail and Evernote - contrary to IFTTT.
This means that if forwarding a GMail (e.g. by tagging it), one can insert a back-link in the text/comment as well. Same goes for Evernote.
This makes a HUGE DIFFERENCE in these cases where users want to connect systems and workflows. Like Matt_Groth also mentioning he wanted to forward mails from Inbox(GMail) and want to refer to them later.

Also, I believe this backlink feature makes such an integration more likely to replace or take the pressure off the demand for other integrations, such as the one for Evernote already listed.
Since users would be able to mark a note there and have it show up in DL with a URL in the text/comment if so desired. Not as advanced as a “hard link” but it goes a LONG way.

And of course, at the same time it opens up connections with 750+ other systems and webservices in one go.

My vote is for Zapier because of the backlink feature mentioned, to tie in my Gmail for project correspondence, my Evernote and my Gdrive/Dropbox for linked project support- and reference material.

But FOR SURE I will also cheer for an IFTTT solution is that is the choice. It will still be a major advantage. Even the email receipt would be a great advantage (but IFTTT or Zapier would make it up for export / email sending as well. Not only receipt).
It is the lack of all this in WorkFlowy that caused me to look for alternatives and thus find DynaList. WF seems stagnant but DL is alive and moving and this gives me hope for it to show up here.

About Zapier, the premium version is paid, but the free version is also workable for limited amounts of traffic. (Plus, you can set up several dummy accounts to spread out the load. This is very easy, especially now that some browsers like Chrome also support several browser profiles open concurrently. I have a couple of separate profiles with separate Gmail addresses that I just open and use for this kind of “system management”. Each Zapier account can connect to any other system accounts, also other Gmails).

I don’t know how similar their interfaces are but Dynalist is already planning an API. So there will be endpoints for common actions already. Then it’s a question of writing an interface for IFTTT and/or Zapier.

Erica - If you are already working on an “Email to Dynalist” feature, then IFTTT and Zapier could easily be set up to use that. Sending an email based on any criteria you specify in IFTTT or Zapier is one of my main use cases for them. So, essentially, once you set up the “Email to Dynalist” feature, you have enabled IFTTT and Zapier users to do their thing.

I would very much like to be able to do the following:

I can think of other use cases as well, but those would probably be the two I would like to have most right now if Dynalist supported IFTTT. (I already use IFTTT for many similar tasks, such as importing from iOS Reminders to 2Do, and saving favorited Tweets to Pinboard, etc.)

I agree with Lasse_Pedersen that Zapier is more towards business systems. I am already using Zapier for my business and a Dynalist / Zapier integration would be very welcome.

If Dynalist would add a Zapier integration, then I would upgrade to Dynalist Pro. (If these integrations were in the Dynalist pro package.)

Where can I vote for a Dynalist / Zapier integration since the Dynalist roadmap Trello board is not actively used anymore?

And don’t forget this

It would be awesome to get Dynalist integrated with other services via IFTTT. So maybe if enough people suggest Dynalist as new service they will add it soon! ifttt.com -> Services -> Suggest a new service to IFTTT (bottom of the page).

Hi, the roadmap is still used to keep track of the vote counts. Trello is just not a good place for discussion.

I don’t think there’s a golden standard - every one needs something different - but for every service I’ve tried I’ve always come back to IFTTT.

Besides Zapier there’s Integromat (really cool, but free tier is limited) and Microsoft Flow (part of Office 365, if you can find it).

Just going by mentions online, IFTTT is twice as popular as Zapier:

Zapier’s strength is that it can work with services that do not explicitly have an IFTTT-like API.

I use IFTTT all the time and miss Dynalist as a service, being at the trigger or action level.

But Zapier has more triggers and actions.

Also, a VERY IMPORTANT advantage of Zapier and an example of “more advanced” is that it is able to forward source URLS for systems like GMail and Evernote - contrary to IFTTT.

Was going to say the same. Many times I’ve tried to do something with IFTTT that it doesn’t support, Zapier supports a lot more, with a lot more actions.

If I’m not mistaken, both Zapier, IFTTT and Integromat support some sort of Webhooks and calling directly a REST API of any webservice. Exposing the Dynalist’s APIs would be enough.

Hi, the roadmap is still used to keep track of the vote counts. Trello is just not a good place for discussion.

Do people know this? How does anybody even discover the roadmap unless coming across a forum post like this

Time for a bit of dogfooding maybe

I think so, it’s in the footer section along with the forum: