And then have the delete option in the context menu?

Yes, that sounds right, so that delete is still in reach. Hmm… maybe a more general feature is that the swipe actions should be customizable?

Yes I want to tick it off without creating a checkbox. An option to set the action of swipe would be great, or at least I want an option of checking off in the menu.

Will look into it next weekend or so

This misbehavior showed up when I let Android update Quick Dynalist. Back when all QD did was to save items to my inbox, it worked as expected.

UPDATE: Huh. That was weird. I uninstalled Dynalist and QD, I re-installed them, and I recreated the Quick Dialog shortcut, and now it works.

That is entirely possible. I do not allow my phone to auto-upgrade (precisely because upgrades don’t always go smoothly.)

What a terrific app Louis, I use it every day. Many thanks!

One question / request - I usually add voice items in my native language and the Google assistant speech to text is horrible at recognizing what I said. I know this is also true for many foreign languages.

It would be fantastic if, instead of relying on the Google Assistant, the voice item would be inserted as an MP3 (low khz would suffice to save bandwidth and upload quota).

I would envision it in a such a way that after clicking on the icon “Voice Item”, the MP3 recording would start recording immediately with 2 small buttons (such as in the Quick Dialog box) always present: PAUSE and SEND. The Pause option would pause the recording process. Then a Resume button would appear, after which the recording would continue from the point where it was paused.

After hitting SEND (during recording or even during pause), the recording would generate an MP3 file and be attached to the inbox we’ve specified. Any plans on doing something like this in the future?

This actually sounds quite nice. I could also use this. I’ll add it to the list of ideas, can’t say when I’ll have time to implement it though.

Great to hear! I believe this feature would be a game changer for many people.
Thanks again for your work!

Trying QD for the first time today, I’m quite impressed. Thank you for your generous work!

But a few things make it, in many cases, less useful for me than the native Dynalist app.

For better or worse, I use notes profusely as an integrated part of my Dynalist workflow, and I’ve customized the CSS so notes are lighter but not smaller than normal text. Therefore the two features which would make QD far more useful to me are:

You want to see multiple notes at once if I understand correctly? Otherwise you can just select the item and pull down the toolbar.

Are you talking specifically about the font sizes in the list of items or also in other places? (e.g. navigation drawer, widgets, filter configuration, edit dialog, etc)

New to Dynalist - set up QD on my phone - excellent

In case I have missed anything, is there a user guide?
Also is it possible to create new documents and folders or can this only be done on the official app?

There is no user guide at the moment (except for this thread perhaps). I would love to put one together though at some point

Creating documents and folders is not possible from the app at the moment but the API for that was created by the Dynalist team in the meanwhile so it is just a matter of implementing it – any contributions welcome. https://github.com/louiskirsch/QuickDynalist

Thanks Louis - much appreciated 🤸

Found a small bug - when editing a Note, Gboard’s auto-capitalisation fails (start of sentence). This feature works fine in editing an Item and in other areas of QD

When I try to configure G Assistant, QD is not showing as an option for adding notes. Any suggestions? 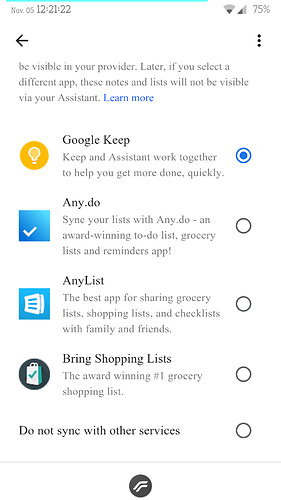 Oh, interesting. Perhaps Google Assistant has changed how they interface with the notes app.
EDIT: Yes, this feature has to be reimplemented using their new API. https://developers.google.com/assistant/app/intents
On the upside it now allows for much more control.

Found a small bug - when editing a Note, Gboard’s auto-capitalisation fails (start of sentence). This feature works fine in editing an Item and in other areas of QD

Thanks for your feedback