Capture and retain knowledge with dynalist

I use Dynalist for many things and I am sure I am not the only one who uses Dynalist as a personal knowledge database.

For most of the time I just wrote down everything in Dynalist and saved it in a less organized way. So a while ago I did some research how other people capture and retain their knowledge.

This took me to Nikas Luhmann. I think most of you have not heard about him but he was one of the most influential social-theorists of the 20th century. He is considered as one of the most productive scientists to this day. He published 58 books and hundreds of papers.

So how did he capture and retain his knowledge?
He used a technique known as the “Zellelkasten” (German: Zettel=slip of paper, Kasten=Box).
Over the course of thirty years he basically stored all his knowledge in multiple archives.
Every time he read something interesting he wrote a note (Zettel). The node had to be entirely self-contained and should explain the smallest piece of complete information. He gave each node an unique ID and referenced the original source.

With this system it was possible to create “follow-up”-nodes:

Notice anything? This is made for Dynalist.

Every note has a similar structure:

Personally I find giving every note a tag more difficult to maintain. So insted of tags I mostly use parent nodes for the topics.

One useful tip is to give every note a heading. Later they will be easy to find using the “is:heading” operator. 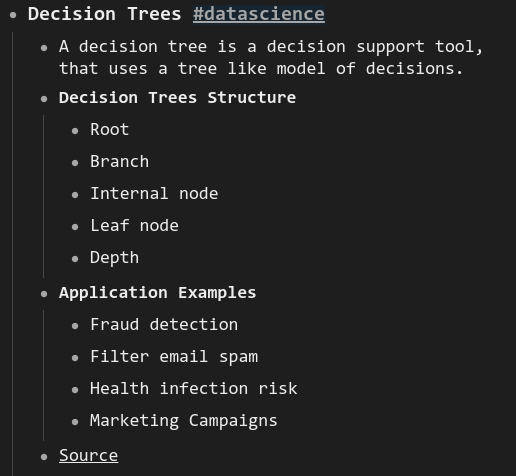 If I now read something that’s relevant for the above note, I could add the information to the existing note or create a new one and link it accordingly.

I would be happy to hear about how you guys capture and retain you knowledge.

There was a discussion about using Dynalist for Zettelkasten here

Great intro @Philipp . I also just started using Dynalist for Zettelkasten in addition to my checklist and projects (GTD). And so far I find it works great.

Since I suspect this will be a life time endeavour I have decided that the most robust way to link is by using tags. Tags won’t break if I ever need to change software.

Hi. I have experimented lately with a better tag structure for Dynalist that both incorporates GTD (Getting things done) and Second brain or Zettelkasten(Personal CRM, Personal wiki, Thought incubator). I think these techniques will be useful to anyone who don’t want their tags to devolve into a mess. For GTD I like to make clearly defined edges and I want my tasks not to get lost among my other tags. I also find that using the tags inline as verbs works better for my brain. “#!Draft proposa…

Do you have any updated thoughts or experiences?

Thank you for linking your post! Since posting my system did not change much but it definitely needs some changes. When I am confident enough I will make a follow up post. Your tag system might be implemented

Thanks for this article. To save different knowledge and article i use two thing :

Now i use dynalist with the brain