But this toolbar does not show up for the main title item of a document, or the title item when zoomed into a specific node.

The menu for the top/title item is accessible in the desktop app though.

Am i missing something? Is there a way to access the menu actions in the mobile app for the title text?

No, you’re not missing anything. I think it wasn’t shown because most actions don’t apply to the title back then (like expand/collapse/indent/unindent), but I agree we should show the bar nevertheless, just disable all the irrelevant options.

Thanks for the quick reply!

It’s rather frustrating to have to zoom out up a level to select the same node to make a change, or even worse have no way of making the change because its the root node of a document.

Actually, I think there are commands missing from the menu of the title node in the web version as well. 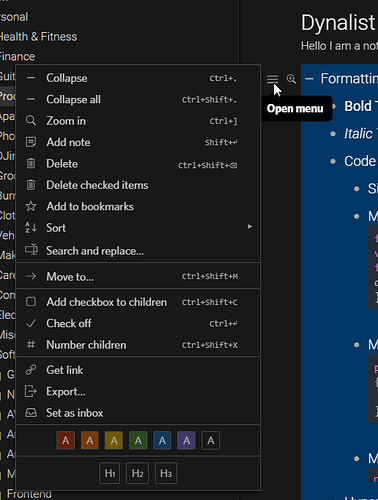 Sometimes I would like to merge the current zoomed node, or an entire document into another node. This is possible by zooming out a level and using move to, or if a root node of a document dragging the document from the sidebar into the target node.

However, it would be much faster to do this with the quick search of the “Move To…”

I don’t see why we shouldn’t be able to add the current zoomed node as a bookmark.

A note can be added to the title node with the keyboard shortcut. But for the sake of consistency this should be discover able in the menu as well.

The only questionable aspect of deleting the currently zoomed node is where to go to after it is deleted. I think it would make sense to simply zoom out a level to the parent node, or if deleting an entire document open whatever default document would open when you first open dynalist.

The sharing menu is also inaccessible on mobile because of this. This is one of my top wishlist items for the mobile app. I also created a separate feature request for this back in April.