Show the next task in the parent item

im not sure how feasible this idea would be or whether enough people would want something like this, but here it is anyway 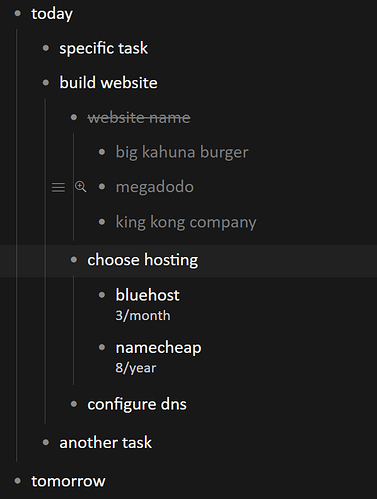 the new problem
once the item is collapsed it goes back to being a vague task which needs to be expanded every time you want to check what needs to be done next: 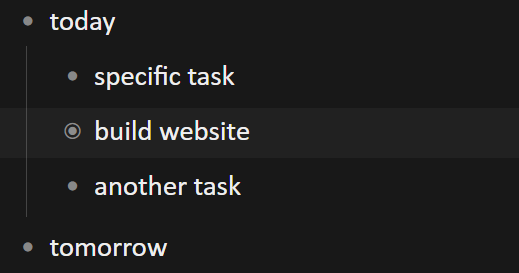 the solution: dynamic next task
a possible solution to all of this would be to have an option to dynamically show the next sub-item in the list that isnt checked or completed

once that task has been completed it will change to show the next task in the list:

a few things would need to be worked out first, like whether you would have a toggle in the menu, or some kind of syntax in the item text like [next_action] that would be replaced with the actual action

you would need to have some sort of notation so you could tell it was a dynamic task and not just a link to something else:

just thinking about this idea a bit more.

it would be good if there was a checkbox beside the next task so you could complete the next task without having to expand and view the sub tasks, then collapse them again after

since i posted this first i have been using a hacked together version of this idea on a few of my notes after i realised that the text inside the link will update if you change the text in the original item. it doesnt really work that great though since the link text doesnt update straight away, and you also have to keep reusing the same item otherwise it wont be linked anymore. but it works ok for some projects im working on where im not updating the next action that often

Wow. I love this Idea! There are almost no apps that support this and those who do, do it clunkily. This suggestion for implementation is one of the best that I have seen. This really deserves to be developed.

glad you like it! unfortunately i get the feeling (from the amount of replies on this thread since i posted it a year ago) that not many people are interested in having this kind of feature.

or maybe there are reasons that other apps dont have it like it might be too tricky to implement. with the above example it might work but there might be times where an item is in the list that isnt a next action but it would show up in the parent item, so you would then need some way to say that X and Y are next actions but Z isnt, which would get tricky

one thing i started to do recently in some projects is to use 2 underscore symbols at the start of every item that is a todo task, which makes it quick to search and filter all the todo tasks in the current view …something like that would be very easy to implement with the above idea. you could have a simple rule that if any item anywhere has __ (or whatever other symbols) at the start then it will show in the parent item.

Well I like it. I agree that a shorthand for what is and is not an action is important. I like your double underscore solution. Maybe “>>”(as you almost suggest in your original post above) would be even better.

yea either one would be good with me! i suppose it could be something for the settings page so people could choose whatever characters suit them best

since i posted this first i have been using a hacked together version of this idea on a few of my notes after i realised that the text inside the link will update if you change the text in the original item. it doesnt really work that great though since the link text doesnt update straight away

im not sure when this change happened but the text in a link now updates straight away which makes this a lot more useful! 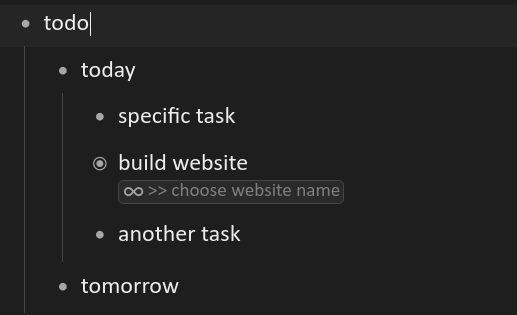 and heres what it looks like on the inside 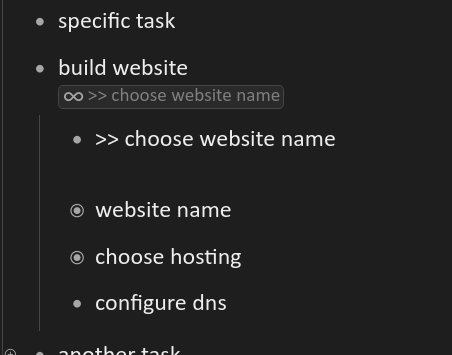 im using >> at the start of the next action so i remember not to delete it. when you want to update the link text just replace everything in the next action apart from the >>
(i also have a few spaces in the note section so that there is a bit more space between the other items in the list)

anyway, as i mentioned in a previous comment, its still not that great for tasks that are going to be changing a few times a day (since you would have to copy and paste into the next action each time), but i can see myself using this for long term projects where the thing im working on next might not be changing that often