I use Dynalist for almost all of my brainstorming and planning.

What the actual hell? I lost hours of work. As it is, I rarely delete notes and I frequently use Dynalist to jot thoughts/data to be able to search for later. As a paying customer, this is absolutely unacceptable and a nightmare. I’m not sure what else I may have lost in these “sync issues”.

I had set up backups with Dropbox years ago and now I just checked for a backup. Despite saying Dropbox was linked, my most recent backup in Dropbox is from 2019! If it wasn’t making backups, why didn’t it notify me or why did it say it was linked?

Lets focus on getting your notes from a few days ago back first, then switch focus to the issues that caused it after. @Shida and @Erica might have more ideas too

Go to version history (not dropbox, it’s a independant thing in the document right click menu) 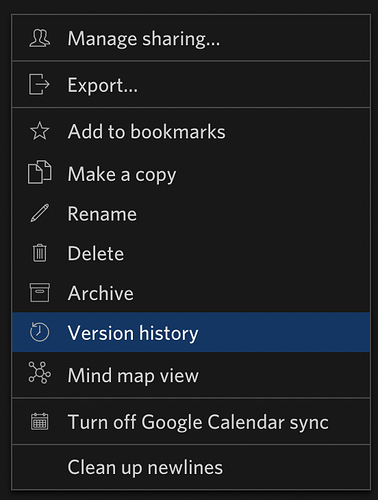 So it was the Dynalist desktop app where you wrote the notes and they vanished before your eyes in? Are you on mac? Do you have Time Machine on? I think the app stores documents in /Users/me/Library/Application Support/Dynalist/dynalist/data before syncing but I am not sure how mac file history works, I’ve never been in that situation, just throwing out more ideas.

Sorry just caught wind of this. Could you provide a bit more details on your setup - are you using the desktop app on both your sessions, or the web app? There’s a few things we can do to debug this issue - your notes may actually still be around on your computer if you’re on desktop and we can help you recover those.

As for Dropbox backups, I believes sometimes the authorization token gets revoked after a while, but in my experience Google Drive does this way more often than Dropbox. We usually send an email about this so you can re-setup the authorization, not sure why you didn’t get it.

You can also contact support via email and we can help you through the recovery process.

I’ve been having this problem for at least a month now, if not longer. Up until today, I usually only lost a line or two and nothing too important. It was annoying, but it wasn’t a deal-breaker.

Today I lost a whole paragraph that was important to me, and then I noticed that higher up in the document a few lines were missing (probably an issue of an earlier sync I didn’t notice). Thankfully, I managed to recover the long paragraph by ctrl+Zing on desktop, but I’m not even sure what exactly was in the few lines I lost above it - I can see something’s missing because I remember typing one of them, and also what’s left in the document doesn’t make sense.

I can live without these few lines, but it’s a recurring issue and it just can’t keep happening. One of these days I’m going to really lose something vital (today came close). My guess is that it’s a sync issue (I use Dynalist both on mobile/Android and on desktop/Firefox) similar to what the OP talked about. I did notice a delay in syncing before, which is fine. Losing data to sync is not fine. Could this be a problem between prioritising which version should overwrite which version?

I hope this is going to get fixed, or I’m going to have to go on another journey of finding a productivity/note-making app that works for me