Standard font on Windows 10: digits have different heights (and widths)

Which operating system are you using?
Windows 10
Which browser are you using?
Desktop App
If you’re using a desktop or mobile app, what’s the version number of Dynalist?
1.3.5.
Are you using any third-party scripts for Dynalist, e.g. PowerPack?
No 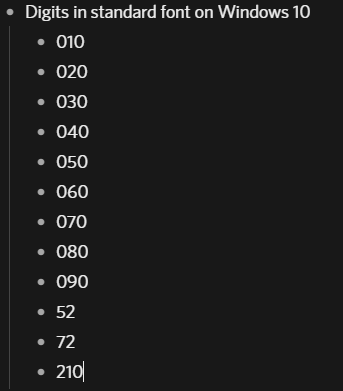 On Android the width issue is similar, but the height issue is much better, only “52” seems a little off, the 5 just a tad higher positioned than the 2. But that is a very small matter, not a real problem.
Also in this bugreporting system the font problem is there as in the Desktop App. But elsewhere in Chrome there is no issue.

Go to settings and switch your font to “System font”.
If you want digits to have same width you’ll have to use something like “Consolas”

Not so. Here is Calibri Light:

It is not a mono-spaced font but most fonts have identical sizes for digits.

Thank you! No need to choose Consolas, most fonts will have evenly spaced digits. Choosing a different font (Calibri) solves mij problem.

But still I suspect something is not as it should be with the Whitney font implementation. When I google on ‘whitney font five seven’ I get from https://www.typography.com/fonts/whitney/styles: 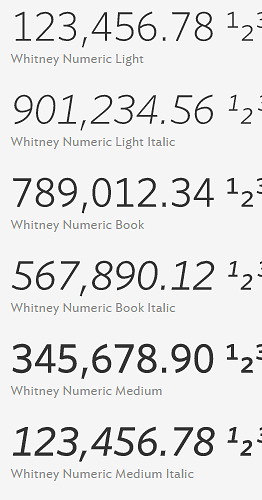 image262×748 31.9 KB
there are no height differences there…
(And also not when looking at the several alternate forms at https://www.typography.com/fonts/whitney/characters)

So my problem is solved, but the problem an sich isn’t.

By the way, I discovered the situation with the width of the digits is more interesting than I thought. See for example:

most fonts have identical sizes for digits

But still I suspect something is not as it should be with the Whitney font implementation.

That’s very interesting. Maybe the one we got is a broken font pack. I’ll look into it.