Which operating system are you using? MacBook Pro (15-inch, 2017) version 10.14.6 Mojave
Which browser are you using? Google chrome (having the same issues here)
If you’re using a desktop or mobile app, what’s the version number of Dynalist? 1.2.3
Are you using any third-party scripts for Dynalist, e.g. PowerPack? Nope

Can reproduce. I don’t understand why but I’ll be investigating the specifics.

Seems like it’s caused by an OS shortcut that we tried to block, but as a result all Cmd related keys were blocked.

We’ll make a proper fix for it though, hang tight.

It’s been a few months. Has there been an update for this? I really want to format as code with a shortcut and use CMD in it

Is this bug also in other versions of macOS? e.g. Catalina has it?

I believe it was fixed around December 10th so you should be able to customize it to another key now. It affected all MacOS versions.

Oh I see… I’m currently not using the PRO version to customize the shortcut.

Ah I see. Unfortunately that might still be due to the “Cycle through windows” shortcut on MacOS. I believe you should be able to change it according to 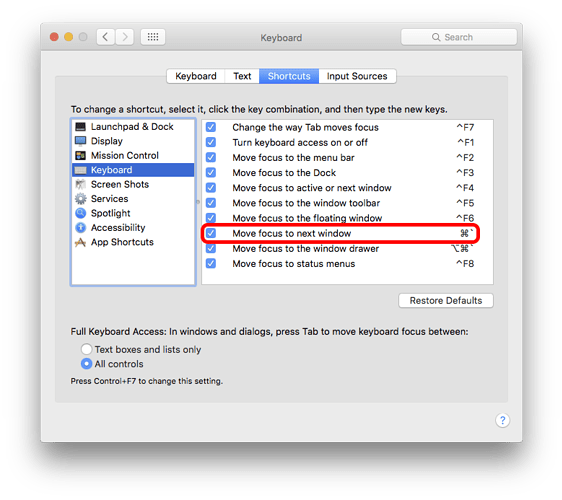 Ah I see. Unfortunately that might still be due to the “Cycle through windows” shortcut on MacOS. I believe you should be able to change it according to

I understand what you mean. Unfortunately at this point I don’t think we can change these shortcuts just because people may already be relying on it.

It doesn’t seem like the case for you, but if you had Dynalist Pro, you would be able to customize the shortcut to another key combo.

I actually do have Pro and have changed it