I hope you are well and had a great start into 2021!
I’ve recently purchased a Apple M1 macbook and thus use ARM64 over x86_x64.
Would it be possible to compile the desktop app using electron’s universal binary export so it doesn’t need to be emulated?

We might need to update Electron in order to do that, will look into it, thanks for the heads-up!

(We haven’t updated Electron in a long time, so it might not be that straight-forward

Any updates on this @Erica?

I guess it’s coming inevitably since it’s just an electron update, so it’s all a moot point BUT just curious did you notice any difference with arm64 chrome dynalist vs rosetta electron dynalist? I poked around a bit and both seem the same speed on my M1, even the laggier action like move-to search seems the same latency. my documents are kinda small so maybe im not stressing it enough to notice tho.

I think we’ll get around to doing this eventually, but we’re fairly overloaded with a few challenging things happening in life and I’m honestly kinda scared upgrading electron across so many versions at once, with backward compatibility and auto-update in mind. I will definitely look into an upgrade when we get more bandwidth though.

Typing lags a little for me – I have quite huge documents. In the browser there is no lag, so I’d expect it’s due to x86 code.

Any update on this issue?

it was mentioned in discord yesterday
still a TBD

That sounds so cool and rad!

I just got my M1Max and would love to see an update on this. Not that the Intel version performs terribly. But it just would be nice not to need Rosetta 2

Hmm yeah, now that dynalist has electron >11.0 it should be able to add ARM support I would think

You can always use the browser version which should be ARM

What do you mean with “the browser version”? The point of having an app is to not need to use the browser isn’t it?

Both use the browser. It’s just out of sight. I’m not the developer, just a user telling the workaround to get native M1 performance now, take it or leave it. 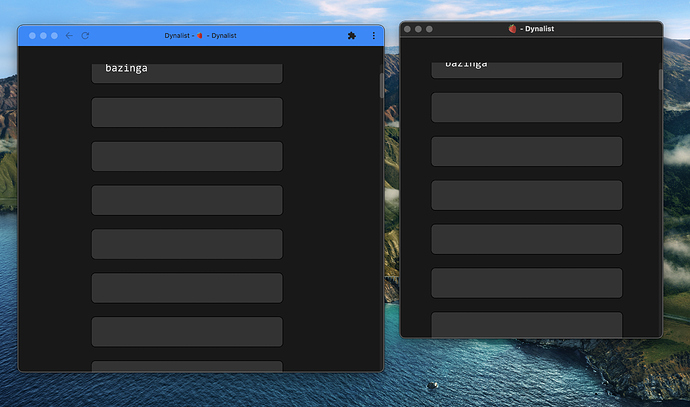 The point of making the app was to enable offline saving, change the title bar appearance a bit, and make the install process a bit more familiar to folks. The downside is that you lock in the version of Chromium, so when a new laptop, like the ARM M1 macbook, comes out, it’s not going to run the newest engine. But you can just package the app yourself with the ARM version of chrome.

App is a bit of a misnomer - any packaging of functionality is technically an app, there’s not much magic difference between an app vs website, especially with Progressive Web Apps.

One way to make an app is to compile the Electron version of the Chromium browser engine, which is how the Dynalist app was made. They compiled the x64 (intel) version of chromium, so it runs in rosetta2 emulation. Some people call electron apps “fake” apps since they arent made from scratch in native MacOS xcode, but are rather fancy websites in a fancy shrinkwrap, so to speak. But I disagree, it’s just another way to make an app.

Another way to make an app is to go to a website in Chrome, click More Tools, then Create Shortcut in New Window. An icon will appear on your desktop, and it will appear as though it were an app. Since there is this extra step, and less visual customization options available, it’s less popular than electron. But it gives you M1 performance.

Thank you for these insights & explanation.
I better understand this now.
However, there are a few questions / thoughts:

All in all, I would still love to see an Electron based app for download which is updated every now and then to get newer models of the Chromium browser.